Menu
Log in
Register
Install the app
You are using an out of date browser. It may not display this or other websites correctly.
You should upgrade or use an alternative browser.

Hi everyone, this is my first post. My problem is that my loo is continually slowly filling with fresh water from my main tank. How can I stop this?

Ladyfreespirit said:
Hi everyone, this is my first post. My problem is that my loo is continually slowly filling with fresh water from my main tank. How can I stop this?
Click to expand...

In the short term, turn your pump off and open the kitchen tap to relieve the pressure.

What toilet do you have?

It sounds like it could be siphoning. More info needed, is it an electric or manual flush and what model is it?
Carry on Camping.

I have a Thetford swivel bowl toilet. I press the blue button behind the loo to flush. How do I turn the pump off? I don’t know if it’s manual or electric but assumed electric as it’s a press button flush? The van is 20 years old so the loo is not new

Press flush should only operate with pump on.

I am sorry but I’m new to motor homing and don’t know how to turn the pump off. Please advise

Is there a switch on your control panel with a picture of a pump or wording to that effect?
Carry on Camping.

Ladyfreespirit said:
I am sorry but I’m new to motor homing and don’t know how to turn the pump off. Please advise
Click to expand...

Try to upload a few pictures of toilet and control panel, would help those trying to help 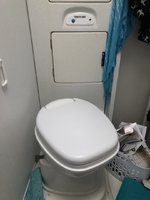 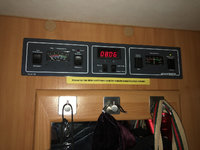 The blue button next to the word Thetford is the flush

Odd that the pump switch is not on the control panel, maybe a dedicated one in the wardrobe or a cupboard.
Kev, Semper ubi, Sub ubi, self build link >>> http://tinyurl.com/y739assz

Ladyfreespirit said:
The blue button next to the word Thetford is the flush
Click to expand...

As far as I know (my toilet looks very similar, just not built-in like yours) that button operates a solenoid valve to allow water into the bowl. I would think the solenoid valve needs replacing, you might be able to see it in the compartment where your cassette is. 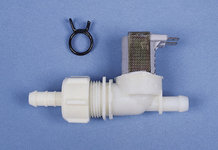 Do you have any more switches anywhere in the van that you don't know what they do?

There should be a label on the cassette door and maybe on the cassette itself to tell you which model to order spares for, google it and you should find a PDF list of all the parts, save it in case you need it again.
Kev, Semper ubi, Sub ubi, self build link >>> http://tinyurl.com/y739assz

I had the same problem and needed to replace solenoid

https://ibb.co/Gcpwg71 I have just renewed the guts of our toilet in the van, looks just as yours does, I have a dedicated switch [ push button ] on the control panel to switch the water pump off, there is NO dedicated switch to Isolate the cassette flush just the main water pump that feeds the complete van water system.
DON'T WORRY BE HAPPY

This picture shows the complete gubbins for your flush, there is a magnetic switch valve that allows water to flow from the reservoir through an anti syphon valve and then out of the flush tip via a hose , the complete replacement of all parts including new hoses and clips cot me £75 all from E Bay,
Your van appears to be an HYMER so if it is like the Hymer I had you will have a submersible pump in your main water tank, which on my Hymer was under a hatch in the floor of the van, just pull a wire connection off if, this is the case if you cannot find a switch, or turn the 12 volt off in the van whilst you work on the problem? on the right of your photo of the control panel there is a green LCD light illuminated above a switch this will be the switch to turn OFF your water pump I would say ? 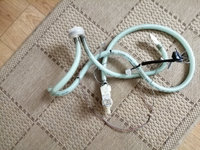 Thank you all so much for your help. I drained all the water out by running the taps. The pump was pulsing on overdrive! Then I refilled the water tank and ran the bathroom tap for a couple of minutes. The problem has gone away!

I still haven’t located any switch to turn the pump on and off. Not sure that there is one

Either the mechanism is a bit sticky or the washer is leaking: could be that a little bit of grit got past the mesh filter. If it is a sticking mechanism, chances are that in a few weeks or months you'll find that it won't flush at all when you press the button. If it was just a bit of grit, it'll probably have washed away and the prblem is fixed.

A replacement valve is about £40 to £50 from Thetford, but you can buy a suitable replacement on ebay for about £2, though it will arrive on the Slow Boat. Fitting the valve is simple: it just fits in line with the pipe using jubilee clips (or cable ties if you prefer).

However, to get to it, you have to remove the swivelling bowl. That requires reaching in from where the cassette fits, and unscrewing difficult-to-reach screws, then taking out a couple (or is it three? I forget) plastic brackets. They're difficult to get out, and almost impossible to get back in. There are also some curved sliding fittings that are not quite so difficult to reach, but still awkward.

The pipe in the crevices of the bowl go via an anti-syphon valve, which you can simply unclip by pushing in a tab at one end. Don't undo the screw at the other end. You need to remember to put it back as you reasssemble!

If you do decide to change the valve (or get someone to do it for you), first take a good look at the condition of the bowl itself. If it isn't shiny and smooth, bright and white, I suggest you get a new one to go back instead of refitting the old one. They're only about £25 or so.
You must log in or register to reply here.

Users who viewed this discussion (Total:103)